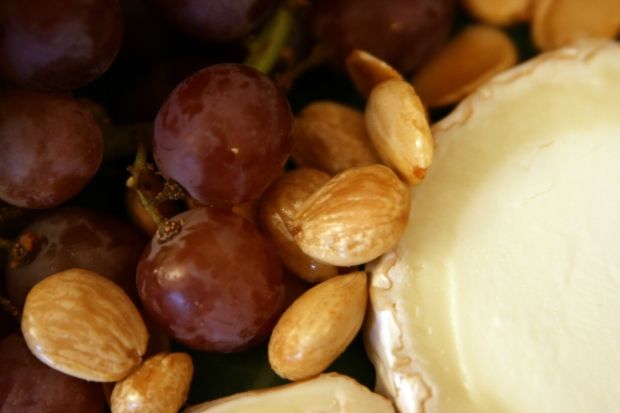 Some friends invited us to join them for a special event at the San Francisco Cheese School last night: a Wisconsin versus California face-off (IRRESISTABLE).  There were four rounds (all paired with beer, of course), and each one included two pieces of cheese – one from Wisconsin and one from California.  It was up to us – a mighty crowd of 26 – to decide which state produces the very best cheese.

The cheese was totally delicious…but what I want to note in this post (since waxing poetic about cheese and beer is a weird thing to do on blog about well-being) is how amazing it was to LEARN ABOUT SOMETHING NEW.  As grown ups (well, at least in my experience as a grown up), it’s so easy to get stuck in the ruts of daily life and forget that there are whole worlds out there waiting to be discovered.  Last night we learned about a world in which people spend a lifetime perfecting recipes and adjusting temperatures and caring for their herds…a world in which a Wisconsin cheesemaker only goes into his cave NAKED for fear of contaminating the aging cheese…and a world where a guy who believed in the power of cooperative grocery stores grew into a famous cheese dude.

Absent of phones and computers, and surrounded by tastes, smells and sounds that kept us in the moment, my brains was able to focus last night, and I settled into the cheesemonger’s rich stories the way I remember sinking into the chapter books my parents used to read…and the way my own kids settle into the stories we read today.  This event was a great reminder of the value of shifting away from our normal rhythms and the power of opening our minds to new and foreign ideas.  Just as we need to mix up our physical workouts, we need to mix up what we put into our brains….and how it gets there.  As someone who finds the physical challenges more natural to take on than the mental ones, this was two hours well spent.  I left with an inspired mind…and yes…a full tummy too.

And for the record, according to my palate, Wisconsin won.  Here were my favorite cheeses in each flight:

When was the last time you learned something new?  What did you learn, and how did it feel?