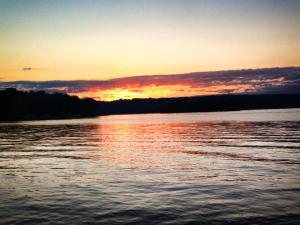 The cottage is made up of four rooms — a kitchen, a living space, a bedroom, and a bathroom — all tiny, adding up to a mere 400 feet or so.  Flanked by forest green paneling and narrow white beams, the space appears fragile but represents resilience.  It looks as if one of the many fierce Midwestern thunderstorms that rage each summer could destroy it in one mighty gust, but it has withstood hundreds….maybe thousands of them of the years.

Norma and Al have been living in this little cottage for as long as I can remember.  Solidly into their 80s now, they arrive in the late spring, prepared to stay until the leaves begin falling off the trees and the crispness in the air begins to penetrate the cottage’s paper thin walls.  There is no driveway; they park their car in the grass.  There isn’t heat or air conditioning; they pile on blankets during cold spells and take them off during heat waves.  Life is overwhelmingly basic.  They watch the sun rise and set.  Newspapers dot the few tables in the living space.  They greet neighbors with warm smiles.  The same pier they’ve had for decades juts out into the lake.  They know people’s families.  They embrace the modern world, but choose the simple one.

My mom took Norma a few extra cucumbers from the garden this morning, and two hours later, Norma strode across the lawn with a beautiful bouquet of fiery red gladiolas.  Maybe because she liked the cucumbers…maybe because she cares about my mom…or maybe just because.  Because she knows what it means to be a neighbor and to have a neighbor….to build connection slowly over time with kind words, genuine care, and small random acts of kindness.

I see Norma and Al once a year, and it seems as if they barely age.  Their lives seem to mirror the strength and comfort of the little green cottage that holds them tight, day and night — a small, mighty, and nontraditional image of what it means to be and live well.