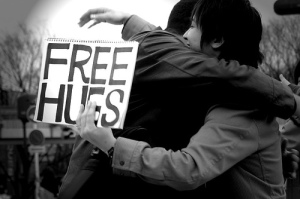 My great aunt takes a regular yoga class in her senior living community.  Over 80, yet as sharp and centered and spirited as someone half her age, yoga suits her.  The sparse wrinkles punctuating her skin are evidence of the calm drumbeat of her life.  Her steady voice and kind eyes reflect her gentle nature.  And her mind is wide open (except when it comes to conservative politics).

Knowing all of this, it’s no surprise that she has embraced her yoga practice, enjoying the stretching and breathing and the HUGGING.  Her teacher has no interest in wimpy hugs, instead asking people to fully commit if they’re going to hug at all.  By fully commit, she means six solid seconds of embracing.  That’s right.  ONE.  TWO.  THREE.  FOUR.  FIVE. SIX.  When she first told me about this, I remember thinking, “woah, that’s a long time to embrace someone who isn’t your mom or partner or kid” (and I’m a hugger).  But I’ve been silently holding onto my hugs for a big longer lately, and actually am noticing that it leave me feeling more connected to the person on the other end.  (The kids get 20 or 30 or 100 seconds sometimes.)

According to a study in the Journal of Ethology, the average hug duration is three seconds, a period of time the study’s author argues is “highly significant, roughly corresponding to what humans experience, and describe, as a ‘moment.'”  I’d argue that some moments are richer if they last a wee bit longer…and a hug is one of them.

From: Love
← Fresh Start
Tequilla and Crickets →
No comments yet

Start With The Core