A Gift from My Dad 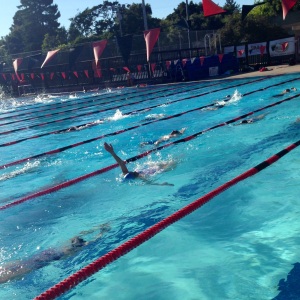 Filling up his lungs with a deep breath of air, my dad closed his twinkling eyes and reclined, allowing his trunk, shoulders, and head to gently slip below the surface of the water.  He always submerged his body in one methodical swoop, causing tiny, frothy bubbles to ripple in even circles away from his core as his body adjusted to the lake’s startling coolness.

The steady clap of his hands on the water was comforting, and signaled me to relax into my self-appointed job as his lifeguard, swishing my feet in the water and soaking up the warm late afternoon sun as I peered into the distance.  The splashes from his kicks would get smaller and smaller as he clipped past the neighbors’ piers, leaving him difficult to distinguish from the gleaming diamonds of sunlight dotting the lake.  Straining my eyes to keep track of him, I always felt relieved when I saw the splashes becoming bigger again, and I could make out his tanned shoulders amidst the waves – signaling that he was heading home.

I watched him swim religiously as a kid, partly out of irrational fear that he might drown, but mostly because I was proud of him and wanted to be a part of what he was up to.  And as time went on, I started yearning to swim alongside him.  I began slowly, first paddling to the immediate neighbor’s pier and then back, gradually extending the distance.  Before long, we were swimming two abreast, me breathing every three strokes and him continuing to breathe every four.

I thought about my dad this morning as a slipped into the pool to swim a mile of my own, something I don’t do often, but to his credit, can still do when I can muster the motivation.  The hundreds of miles he swam when I was small – something he probably did to clear his mind of the chaos of three little girls running around the house – were a gift in my life. By loving the water, my dad taught me to love the water.  He taught me to thrive on feeling strong gliding across the waves.  He taught me to stay focused on the horizon rather than the bottom of the lake.  And he taught me that his “me time” and our “we time” could one day overlap.

Kicking methodically as the sun shone on my back this morning, my thoughts drifted to the lessons I’m teaching my own small children.  Just as his rituals shaped my future, my rituals will shape my children’s.  They are watching and listening to everything, and whether I like it or not, the way I eat, the work I do, the words I say, and the way I treat my husband are settling deep into their cores, laying the foundation upon which they’ll grow.  My proof of this, this morning, was in the pool.

I came home from my swim to find my daughter walking around the house wearing my running shoes, and I overheard her telling her brother that she was “going for a little run.”  I couldn’t help but smile.  The rituals are sinking in.

P.S. At 66 years old, my dad still puts in a solid mile in the water nearly every single day.  Hero!

A Team Is a Micro-Culture. We Can Offer Managers Tools to Support Them.

An inventory of the meaningful life.